Lane priority is a basic to medium level concept you need to understand as a jungler. It will allow you to play correctly around your lanes and thus win more games.

What does Lane priority mean?

It means the laner with "Lane prio" can respond quicker if the junglers are fighting (over scuttler or jungle camps). Usually the laner that can get to the fight faster is the one who is pushing. 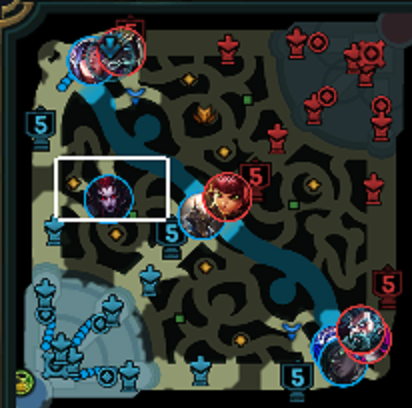 Which lane has prio in this minimap? (you being Elise)

The answer is Top, as you can see the enemy Nasus can't get out of his tower without losing a lot of farm, while Irelia can quickly rotate to a jungle fight. Elise has the options to take the enemy jungle camps or take the Rift Scuttler when it spawns, and if the enemy jungler tries to contest, he will be in a disadvantageous situation.

How to play around Lane Priority?

The most important thing you will get from playing around Lane prio is that you will minimize risks. For example: 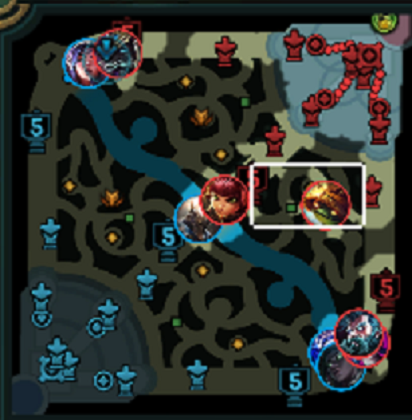 This is the minimap of the same game, Rammus is doing a full clear that will end in his top side. He knows Elise started in her Red buff, so she will be top side too. Should Rammus even attempt to get top side Scuttler? No, enemy top has lane prio while mid is equally matched. Not only Rammus should not even think about Scuttler, but he also should be really careful while farming his top side camps, since Elise is an early game jungler and Nasus could not really help if Elise decides to invade.

On the other hand, Elise knows she has lane prio and a strong early game, which means she can freely take Scuttler and invading the enemy jungle is also an option.

But what about ganking?

Despite Irelia being pushed in she is not really at risk of being ganked since both junglers started bot. If Rammus ganks top then Elise is likely to counter gank and also Irelia can use her huge wave of minions to her advantage.

In Elise's case, she could either try a gank mid or invade the enemy jungle. Despite Elise being a great diving champion she can't really dive Nasus, since it is likely that Rammus will be top too. The best option? Skip blue, invade the enemy Red. Ping for help if you need it.

What can you do with Lane priority?

"All lanes are pushing I can't do anything"

You probably have been in this position if you play jungle. Now you know that this will probably translate into your laners being able to rotate faster if a fight starts in the jungle, which means having priority. You actually are in an advantageous situation.

How to play if you don't have Lane priority

As you see, having Lane priority is way better than not having it. Play around it and plan your route accordingly.