Those of us who spend a ton of hours grinding in mmorpgs,  playing story driven titles or climbing the ladder in ranked games. We pass a lot of time in front of screens, this can be detrimental to our health, it’s not by chance that gamers tend to have awful sleep habits.

Modern displays produce a lot of harmful blue light emissions. This light affects our natural circadian rhythm and eye health. Let’s take a look at this, how to prevent the harmful effects and even gain an edge out of it. 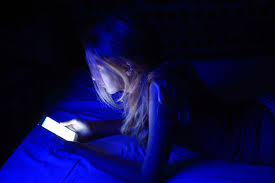 Gaming popularity and time in front of blue light emissions

Not only we are exposed to blue light when playing computer games, but also while playing on consoles and phones. There is a wooping 2.5 billion games in the world, for comparison, this is around 8 times the whole population of the United States of America.

Because of advances in technology like ARM processors and 5G, this number is only going to increase, people are starting to warm up and wish for some mobile games, titles like Pokemon go, Hearthstone, PUBG Mobile, TFT and so on. VR headsets are gaining traction too with a market worth more than $16.8 billion in 2019 and growing.

The bottom line is, nowadays we are in front of a screen most of the time. So we should really take a look at detrimental effects this could cause. The most notorious is blue light emissions, which disrupt our sleep and sight.

The new generation is starting gaming at the ripe age of 4 years old, and the older gamers are currently at the 50 year old mark (with exceptions over this, of course). This is not a bad thing, as gaming is notorious for increasing perceptual and cognitive performance.

You might be one of those thinking right now “I do exercise and have good posture, I take care of myself”. That’s fantastic, but there is still a very important aspect we must watch out for: Electromagnetic Field exposure and Blue Light emissions.

There are two kinds of EMF exposure. High level radiation, called ionizing radiation. Is sent out in the form of ultraviolet rays from the sun and X-rays from medical imaging machines.

The other type of EMF exposure is Low level radiation, also called non-ionizing radiation, is mild and thought to be harmless to people. Appliances like Wi-FI, phones, microwave ovens, computers and so on emite this form of radiation.

EMF is responsible for minor health concerns such as skin rashes and headaches. Studies have also shown that EMF radiation activates the cellular stress response, which in turn causes the expression of stress response genes and increased levels of stress protein, which in time causes cell damage, DNA fragmentation and fertility problems.

To avoid all the problems mentioned above we recommend keeping a good distance while playing a game, in the cases of consoles or desktop gaming this is easier. Playing games on a handheld system or cell phone should be limited and those objects must be put away when going to bed.

Lastly the damage caused by cheap or bad displays. You probably have heard about blue light emissions, but what is blue light?

What is Blue Light

Sunlight contains rays in the frequence of the colors we know as orange, yellow, red, green and blue, depending on the energy and wavelength of the individual rays. Combining this spectre of coloured light we get what we call white light or sunlight.

Blue light is characterized for containing rays with shorter wavelength (380 to 500 nn) and high energy, but not as high as ultraviolet light, which is in the non visible spectrum, unlike blue light which is visible. Blue light is everywhere, it’s mainsource is sunlight and you can also find it in most dispositives with displays like television, computers, phones and so on.

Is Blue light bad for sleeping?

This is currently a controversial topic, if you go to the wikipedia page about blue light you will find that the article’s neutrality is disputed. Blue light has been known for disrupting sleep since a long time, now a new study and a lot of news sources say blue light wasn’t so bad after all. Based on the papers we think Blue light is bad for sleeping, but don’t believe us, let’s take a look at the research.

Research that says blue light is not bad for sleep

Recently a group of researchers at the University of Manchester in the U.K. published a study challenging the idea of blue light being bad for sleep. They exposed mice to light different in wavelength (color) but equal in brightness and then assessed their subsequent activity. The researchers concluded that actually yellow light disturbs sleep more than blue light. The study was surprising and a lot of sources started publishing articles about how ‘blue light bad for sleep is a lie”.

Nevertheless there is some questioning to the study, as mice behavior often doesn’t translate to human behavior. And there are additional caveats to this particular paper. The researchers looked specifically at cones in the animal’s eyes, which detect color and not melanopsin, which senses light and is central to melatonin and therefore sleep.

Research that says blue light is bad for sleep

This study suggests that blue light is an especially powerful melatonin suppressant. Melanopsin, the pigment in charge of telling your eye cells how bright it is, is particularly sensitive to shorter wavelengths like blue light, which means this type of light emitted by displays affects the body more dramatically than other colored light.

This highly cited paper from 2014 showed that using blue light emitting iPad before bed suppresses melatonin, while reading a traditional book does not. The subjects who read on iPads started producing melatonin 1.5 hours later than usual the next day, and experienced REM sleep -the phase which dreams occur and memories are consolidated- once they stopped using iPads before bed.

In conclusion to blue light being bad for sleep or not, we think it is indeed bad and you should try to avoid it either by not looking at bright displays before sleeping or enabling night mode in your phone. Also it is important to add that light color isn’t the only thing that matters, so do brightness and duration of exposure, so set the brightness to a minimum possible.

Is blue light bad for you eyes?

Cornea and lens in the human eye are very effective at blocking UV rays from reaching the light sensitive retina at the back of the eyeball. Nevertheless visible blue light passes through the cornea and lens and reaches the retina. This increases the risk of macular degeneration. Early laboratory research has determined that too much blue light exposure leads to damage in light sensitive cells in the retina.

Although more research is necessary to determine how detrimental to our vision blue light from our displays can be. Many eye care professionals are concerned with the exposure from digital screens, but the research is not yet conclusive.

Blue light exposure taken at the right times and amount is good and necessary for your health, as we said before, most blue light comes from the sun, and you should take moderate doses everyday.

Research has shown that blue light exposure boosts alertness, helps mood, improves memory and cognitive function. In fact there exists light therapy that uses this spectrum of wavelength and is used to treat seasonal affective disorder and delayed circadian rhythm syndrome. Now keep in mind this therapy consists of exposing to bright light  early in the morning as opposed to close to bedtime, which we previously established as detrimental.

Conclusion
Blue light is not intrinsically bad, exposure at the correct times is beneficial as exemplified in the case of bright light therapy. Take sensationalist articles saying that 'blue is not what we thought' or 'blue light is not bad' with a grain of salt, different studies seem to oppose each other, but the vast majority point to that blue light is indeed bad for sleeping if exposure is close to bed times.

Exposure to blue light is often related to sedentary lifestyles, being too much sitted in front of screens and doing no exercise is bad for the health of anyone by itself, adding blue light as a factor only makes it worse. To solve this it is recommended limiting exposure close to bed time, doing plenty exercise and having good eating habits.