Let's review Starcraft Terran Origin in greater depth, with theories about both the game's storyline and Blizzard possible future or past titles. Terran Storyline insights and how Terrans originated: Natural selection or Xel'Naga failed experiment?

Created by the Xel'Naga? 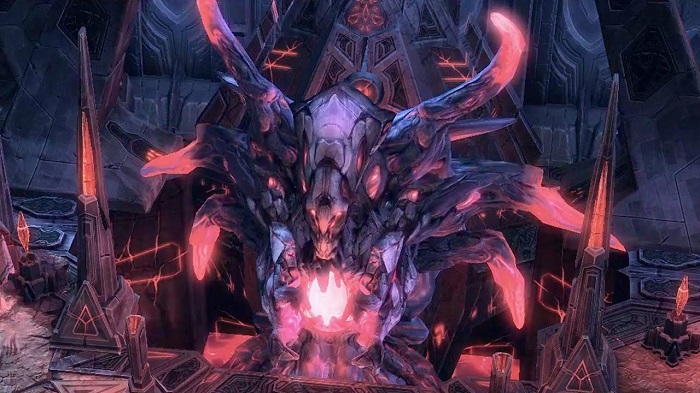 Emil Narud, a Xel'Naga, aseverates that terrans are product of a failed cycle, which implies the human race was originally created by the Xel'Naga in the same way Protoss and Zerg were. While it's true that the "Great Teachers" -as Protoss call them- are the ones to seed life in every universe, and therefore indirectly create humans, it's false that this race had a direct intervention in human evolution. Emil Narud's failed cycle aseveration must be taken simply as an insult to the human race.

Real Origins
We, IRL humans, are ancestors to Terrans, we evolved over million of years on Earth, slowly advancing ourselves through trial and error. Terrans as we know them in Starcraft separated slightly from human race later in history.

Twenty century was a good time for human science and culture development, then in the Twenty first century tensions rapidly grew as even poor nations had access to powerful technology including Nuclear weapons. Following the erradication of Communism from the easter countries. Third world nations challenged the military and economy might of the worlds superpowers, destabilizing and destroying the current international power structure.

In response to private corporations who profited from genetic experimentation and human modification a new powerful faction arose. The Humanists, they strongly opposed the multitudes of people buying cybernetic implants or slight physical mutations ranging from heightened senses to advanced telepathy.

As centuries and technology advanced humans saw a huge increase in population while still not habitating new planets, by the year 2301 Earth's population was estimates at 23 billion. Added to a lack of natural resources and a wave of genetical experimentation, popular sentiment held that a catastrophe was inevitable.

International economic systems collapsed and shut down as tensions grew. Acts of terrorism and violence erupted between the corporate sector and humanist factions, resulting in forced police actions across the earth. Civil unrest was rampant all across the world. Finally all power structures succumber and in the need of order a new power arose.

The United Powers League was founded on November 22, 2229. Their facist actions in these chaotic times were seen as good or in persuit of a very necessary order. Their economic paradym was a new enlightened socialism. This new power structure unified humanity and effectively controlled close to 93% of Earth's population. Only a few volatile South American countries scaped it's cloak. In order to unify humanity UPL was as far as imposing English as the common language of Earth and banning all other native languages, to the point that people forgot their own language in favor of english.

Project Purification
The Unitariate Commissions oficially banned religions, althought the UPL had a fervient almost religious belief in the supposed divinity of mankind, which called for the immediate eradication of any non-vital prosthetics or mutations amongs the pure-strain human gene pool. Hard-line proponents and scholars of this faction argued that cyber technology, genetic alteration and usage of psychoactive drugs all led to humanity's degeneration.

The UPL set Project Purification in motion, UPL troops secured every nation, prosecuting all dissidents, hackers, tech pirates, the cybernetically enhanced and every person they deemed as criminals. This provoked a massive genocide accounting for more than 400 million executed. The media was under the UPL's control and downplayed the violence, keeping the general public unaware of the atrocities under the UPL regime.

Humanity colonizing space thanks to the UPL
The dominant nations of the previous centuries had abandones space research as a consequence of social and political turmoil. Now under the UPL's strict control and forced stability it was posible to reopen space research. Cryogenic hibernation and Warp Space -faster than light travel- technologies allowed humanity to deam again of a future in the stars. In just a 40 years period the UPL founded colonies on Earth's moon and many other planets within the Solar System. 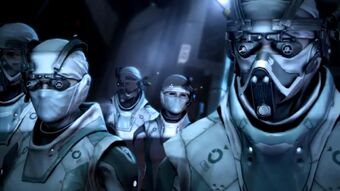 During this period a prominent Scientist, Doran Routhe, became obsessed with founding colonies on the outlying worlds, his motivations were rather about hiw own personal gains than scientific. He believed that the outer worlds would led to the discovery of alternate fuel sources and new minerals, which would make him the most infuential man on Earth. He used his power and personal fortune to secure 56 thousand prisoners that were slated for mass execution under the edict of Project Purification.

The Long Sleep
The prisoners were transported to Routhe's private laboratories, where they were prepared for long-term cryogenic hibernation. He registered their various mutation and Cybernetic enhancements, then input all of the data into ATLAS, an intelligent supercomputer, which processed this genetic information and predicted which of the prisoners should be able to survive this rigorous conditions. The 40 thousand who were deemed viable were loaded onto 4 supercarriers with enough supplies, rations, hardware and the ATLAS to help them reach their destination and aid them once they arrive. The navigation computer was programmed with the coordinates of Gantris VI. 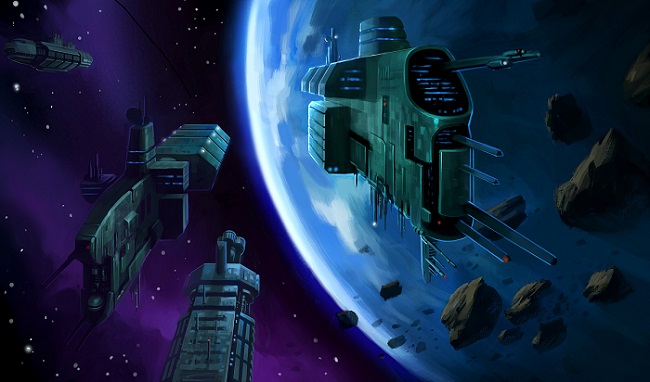 These ships were intended for colonization, thus they included technology such as frozen fertilized eggs and embrios, food processors, cloning technology, etc.

"Long ago our ancestors were cast out from their home-world, deemed unfit for civilized society. They packed our forebears into spaceships and gav them the dubious honor of colonizing a barren swath of the galaxy. They probably thought we'd be wiped out by the dangers of the universe, but they understimated us. We're survivors. We're winners. We're Terran. And we intend to bend the universe to our will."

The spaceships had names, they were called Naggifar, Argo, Sarengo and Raegan. The Naggifar had the ATLAS installed in it and the other spaceships were programmed to follow it. The original destiny was Gantris VI. It was scheduled as a one year trip. ATLAS continued to monitor the prisoners in stasis over the course of the journey.

Evaluating the numerous mutations and enhancements found within their gene pool, ATLAS became aware of a powerful mutagenetic straing that existed in the DNA of less than one percent of the prisoners and seemed to augment the latent psionic potential within the human brain. ATLAS calculated that many of the descendants of the prisoners might benefit from this mutation in only a few generations if they survive their new enviroments. These findings were recorded and relayed straight into Reuther's logs.

The prisoners were unaware that the UPL was recording their every move, content to observe them without interfering in their affairs.

Change of destiny. Accident?
For some strange, not yet revealed in the game reason, the navigation systems linked to ATLAS shut down, erasing the coordinates of Gantris VI and Earth. The supercarriers got lost in the warp space for 28 years until their warp-drive engines reached critical meltdown.

Among the Starcraft community there are theories indicating that this 'accident' might have been caused by Samir Duran, a Xel'Naga who took many human forms to manipulate history. In favor of these theories we can argue that while it is understandable that weird things happens in warp-space, for an advanced super-computer like ATLAS it's really difficult to completely lose both Earth and Gantris VI coordinates. 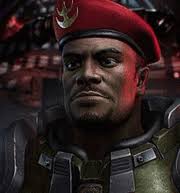 The Xel'Naga in one of his human forms

The suprcarriers emerged into real space in the Koprulu sector. With their engines destroyed and their life-support batteries nearly exhausted, the ships engaged their emergency protocol and plummeted towards the nearest habitable worlds.

The Sarengo and Reagan crash-landed on Umoja. The Sarenjo suffered massive systems failures during its atmospheric descent and crashed into the planet, resulting in the death of all it's 8,000 passengers. The Reagan, on the other hand, made a controlled descent and landed safely. The cold sleep chambers were deactivated and the passengers slowly awakened. They attempted to discern where they were and how long they had slept, but found that ATLAS somehow had erased all data of their journey from their computer banks.

The Argo and Naggifar landed on Moria and Tarsonis respectively, suffering the same destiny as the Reagan. All the prisoners that survived knew they would never see or contact Earth ever again. ATLAS, which despite its many critical failures survived, was vital to give the colonist a head start when it came to stablishing themselves.

All the different colonies thought they were the only survivors, with that in mind, they started to create what they would deem as 'the New World', surviving with what ever knowledge and resources they could find. They even used their old spaceships rests as material for their new refuges.

Having access to colonization technology such as cloning, artificial embryos and food processors coupled with a social pressure to have as many children as possible, the new worlds grew quickly in a short spawn of time. The Tarsonians expanded so rapidly that they established cities and industry over much of their planet's surface.

Umojans spread across their planet too, and unlike on Earth, they adopted a method of fair and democratic governance that later became know as the Umojan Ruling Council. It had a philosophy of leaving nothing to waste.

In a relatively short amount of time, all three colonies spred to other worlds and developed their own prosperous, self-supporting economies.

After sixty years, the Tarsonians, the most technologically advanced colony, developed second generation subwarp engines which allowed them to make contact with Moria and Umoja.

Once reunited the three colonies benefited from mutual trade and commerce treaties. A mining and manufacturing boom took Moria by storm. Dozens of small family-run guilds scrambled to claim as much land as they could. The same happened in Moria's colonies: Vito and Brutus. Over time, the larger guilds used a variety of shady tactics to eliminate competition until the Morian Minin Coalition and the Kelanis Shipping Guild came to dominate Moria's economic activities, gradually gaining political influence over Moria and its associated operation on nearby planets, moons, and asteroids.

Tarsonis repeteadly pushed Umoja and Moria to join in a conglomerated goverment, but the two colonies steadfastly refused, as they were faced with the likely dominance of Tarsonis in such arragement. The Old Families responded by expanding their military and colonizing more aggressively.

To be continued and a few ideas

In just a few generations the prisoners colonized and grew what is in its own righ a new civilization, not only that, but this new Terran civilization is soon to be facing entire intelligent species like the Protoss, Zerg and even Xel'Naga. It's only a very recent fraction of humanity that is facing these species, that begs our next point.

What about the humanity in Earth and the Solar System?
The new World lost contact with Earth and therefore with the Solar System and it's colonies, which amounts to the biggest part of humanity. We know that later in the history of the games Earth tries to conquer the Koprulu sector but fails.

I will cover the events leading to this in another post, but for now I will leave you with some ideas about what Blizzard could do with this complex history.

Simulation or turn based game:
The human colonization of the Koprulu sector has an intricate story and is impressive in itself. Blizzard, if they wanted and if it was lucrative, has a real posibility of making a simulation game about this, something along the lines of Civilization Beyond Earth, but with a campaign story. I know I would buy this and many others would do the same. 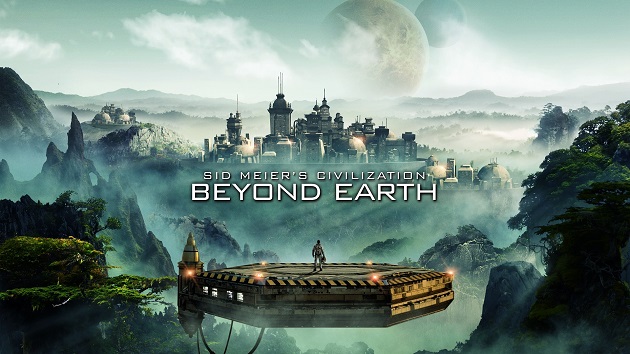 I know some of you might be thinking about some of Blizard's cancelled games, or Blizzard's games that were forever in development phase. Nevertheless dreaming is free.

We will cover the rest of the Terran history in future releases. There we will talk about The Confederacy, The Dominion and Jim Raynor. 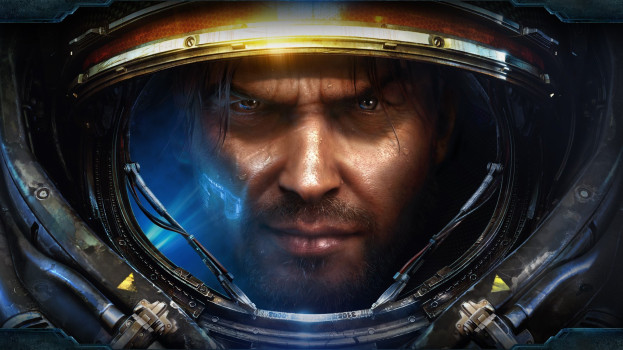 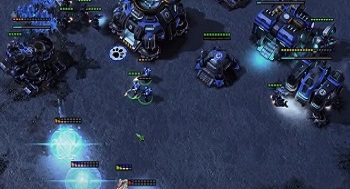 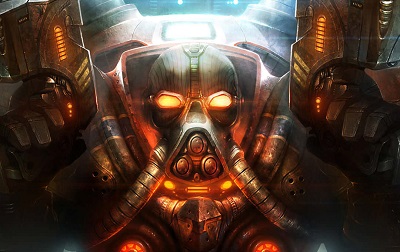 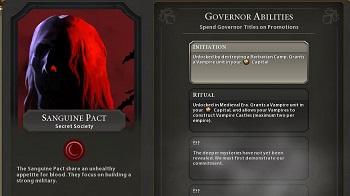 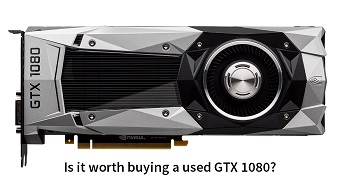