With the announcement of the NVIDIA RTX 30, graphics card MANUFACTURERS have followed suit with their custom models. In this way, we have been able to know how the models of brands such as Colorful, PNY, GIGABYTE, ASUS, ZOTAC, Gainward, INNO3D, EVGA or MSI will be.

Yesterday was announced the new NVIDIA Ampere architecture, focusing this event on the RTX 3070, RTX 3080 and the RTX 3090, which replaces the Ti version. We only saw the Founder’s Edition models, so many people are waiting to see what custom models the most famous assemblers will bring out. You will not have to wait long, I will show you each and every one of them. 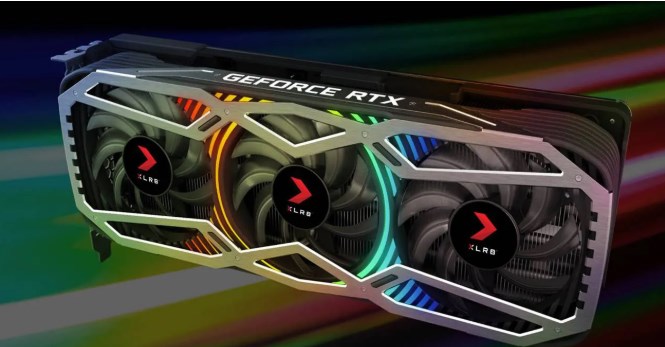 PNY is one of the best-known assemblers of NVIDIA graphics cards, so they show us their custom models of the RTX 3090, RTX 3080 and RTX 3070. The 3 GPUs would fit into the XLR8 Gaming gamut, which is characterized by offering overclock factory and RGB EPIC-X lighting on your graphics cards.

This line of products is compatible with PNY VelocityX software, which allows you to overclock the GPU and monitor the most relevant data, such as temperatures and frequencies.

All graphics cards will be equipped with 3 fans, although there will be a 2-fan version on the PNY XLR8 Gaming GeForce RTX 3070.

As for Colorful Technology Company Limited, they have presented their line of models consisting of the RTX 3090, RTX 3080 and RTX 3070. It is aimed at the most demanding enthusiasts, which is why they wanted to introduce the iGame Center, a software that integrates iGame Zone and iGame Dynamik Light in one application.

This application fusion aims to simplify all the control of RGB lighting, such as the overclocking functions that we have. We would like to highlight several details of this gamut, as it is loaded with news. Its gamut is divided into: Vulcan, Neptune, Advanced, Ultra and NB. 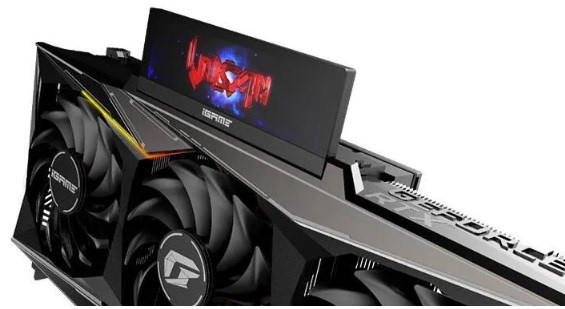 Starting with Vulcan, the NVIDIA RTX 30 Series belonging to this gamut will come with an LCD screen with a size of 480mm x 120mm. This screen can be rotated 90 degrees to make it visible when we have the graphics card mounted. On this screen you can display the GPU temperature, images, GIFs and much more. Also, Vulcan models will have 3 fans 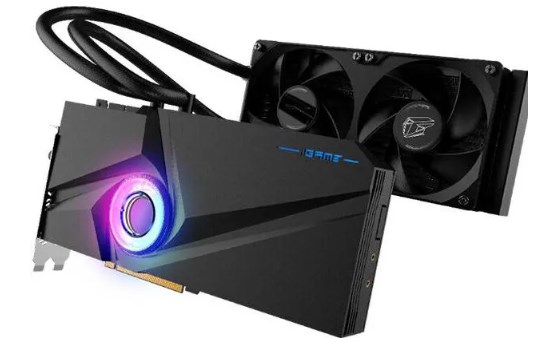 The characteristic note of this gamut is in the liquid cooling system that it brings with it in order to have a silent GPU. This kit is connected by PCI-Express and has RGB lighting in the center, which can be configured from the iGame Center software. It seems that Colorful has focused on the iGame GeForce RTX 3080 Neptune, as it would come with a full water block.

With the purchase of a Neptune model we will get a tool kit so that assembly is not a problem.

The COLORFUL iGame GeForce RTX 30 Series Ultra models are aimed at gaming lovers who enjoy their video games as a lifestyle. Also, we will have 3 fans on the graphics cards, but not the same size: 2 of 90 mm and one of 80 mm.

Finally, we have another gamut within the COLORFUL models, which is this NB line. Its differentiating notes go through an improved 3-fan structure for better cooling in the COLORFUL GeForce RTX 3080 NB.

The assembler INNO3D has taken the opportunity to show us 4 models of what will be his next graphics cards. The outstanding novelties are the improved fans present in its iCHILL X4 and X3, Gaming X3 and TWIN X2 OC gamuts, differentiating models with 3 and 2 fans. Specifically, the models they offer are the RTX 3090, RTX 3080, and the RTX 3070.

RGB LED lighting is present, except for the TWIN X2 OC line.

This line of GPUs is composed of the 3 new NVIDIA RTX 30 with the aim of offering the best cooling solution and the best factory overclocking. The idea of ​​INNO3D has been for the user to install the graphics card and start playing without having to configure anything.

The graphics cards belonging to this gamut will come with 3 x 9cm fans that are asymmetrical and that use Scythe blades to maximize airflow, such as to operate in a low rpm condition.


The main difference of iCHILL X4 is the heatsink with 8 copper pipes, while the X3 gamut comes with 7 copper pipes. This translates into a 33% performance increase compared to its previous heatsink. Note that the X4 gamut comes with a small 4.5 cm fan in the MOSFET area to offer additional cooling. 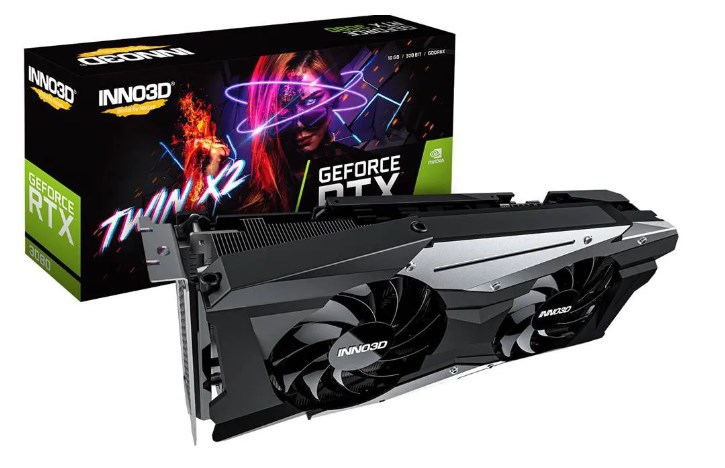 As for the GAMING X3 line, its GPUs incorporate 3 9 cm fans so that cooling is not compromised. The novelty here is marked by the TWIN X2 OC gamut, made up of the 3 main GPUs and incorporating 2 Scythe 9 cm fans, as well as a heatsink with 7 copper pipes.

One of the best assemblers in terms of value for money is ZOTAC, which has introduced us to its AMP Extreme, Trinity and Twin Edge Debut gamuts. Its models are the 3 protagonists of today: the RTX 3090, RTX 3080 and RTX 3070. 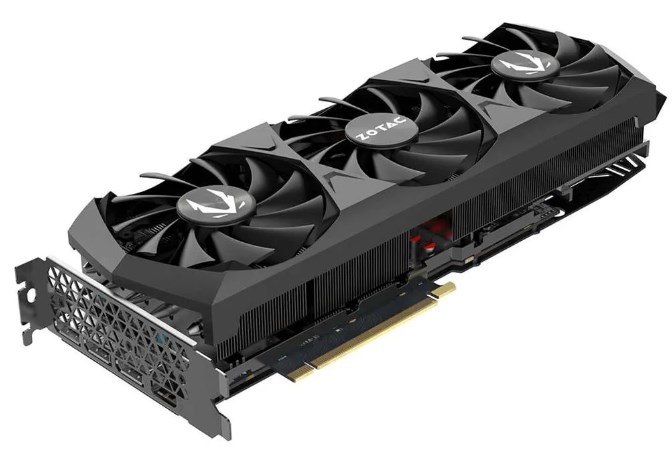 Aimed at gaming enthusiasts, it is a gamut that introduces the HoloBlack design, which has a holographic finish similar to that of a moving aurora. The RGB lighting changes color depending on which angle we look at the GPU. Its lighting system is SPECTRA 2.0 RGB, which shines below.

Its front plate and back plate are made of die-cast metal, ensuring AMP Extreme durability. Also noteworthy is its POWERBOOST chip, which resists high temperatures. 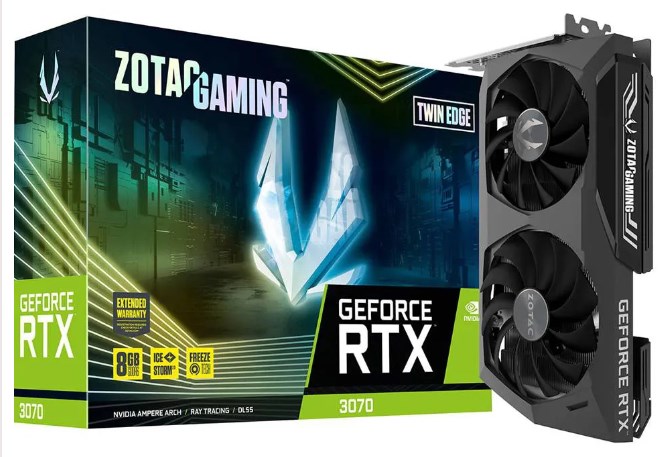 Both brands are new to ZOTAC and offer models with a triple fan as well as a dual fan. All the gamuts (including AMP Extreme) come with the Ice Storm 2.0 cooling system, which manages to cool the graphics card so that we can enjoy our games at maximum performance.

They include a new 11 blade fan that increases airflow by up to 10% compared to their previous designs. In addition, it has the FREEZE function, which stops the fan when the GPU is not being loaded with work.

Finally, ZOTAC offers us its ZOTAC GAMING FireStorm Utiliy software to adjust our GPU: monitor it, overclock it or customize the RGB lighting. 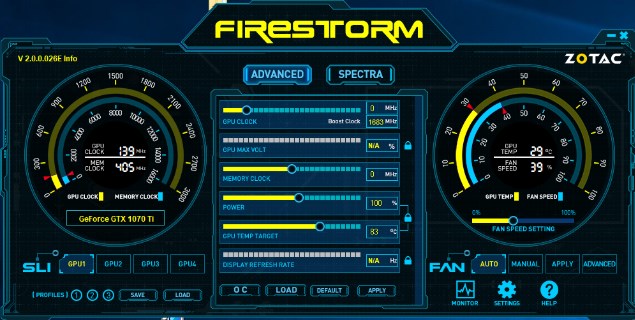 AMP Extreme and Twin Edge will be released in october

All the other models will come out around September 15th. 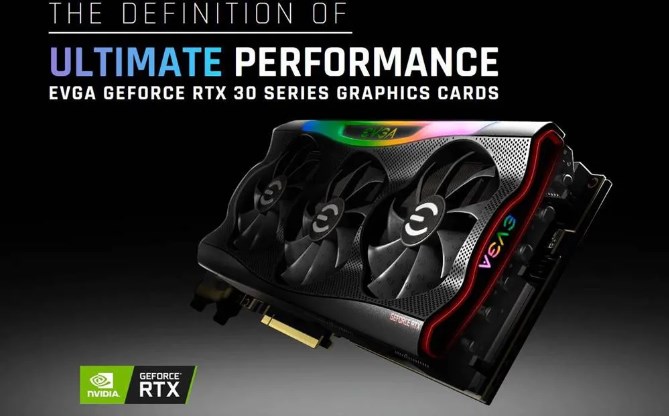 EVGA is one of the brands that brings the best quality to the graphics card sector, a legacy that has wanted to continue with the RTX 3090, 3080 and 3070. In their case, they have not released extra gamuts, but they present their three models in a differentiated manner. Simply highlight its iCX3 refrigeration technology, which brings the following novelties: 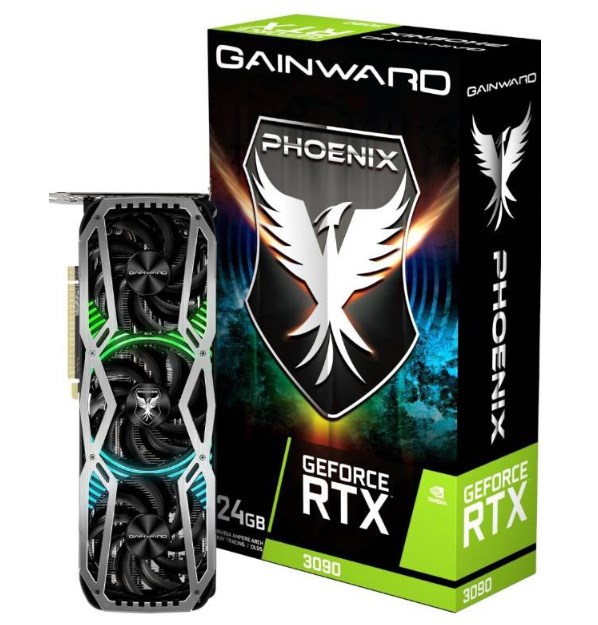 We started with the Gainward model, which has already been leaked and we echoed it. This is the Phoenix gamut, which will feature 4 GPUs in total: 2 Phoenix «GS» and 2 «Phoenix». Specifically, they would come an RTX 3080 and an RTX 3090 that would be the Phoenix "GS", while another 2 would be the "Phoenix" to dry.

Those of Gainward have wanted to bet on a dissipation of 3 fans and ARGB lighting, as well as a new thermal design focused on absolute silence called "Zero RPM". Basically, the fans are stopped until the GPU is loaded with work, at which point they will start spinning.

Both NVIDIA RTX 30s will come factory-overclocked in the Gainward "Golden Sample" version, which aims to provide extra FPS for gaming enthusiasts and thus play at maximum performance in 4K. The differences between the 4 graphics cards are only marked by the boost frequency. 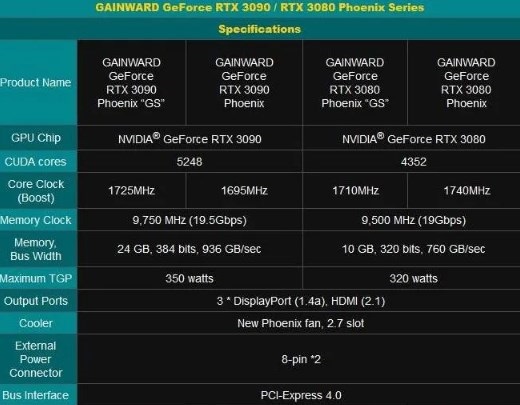 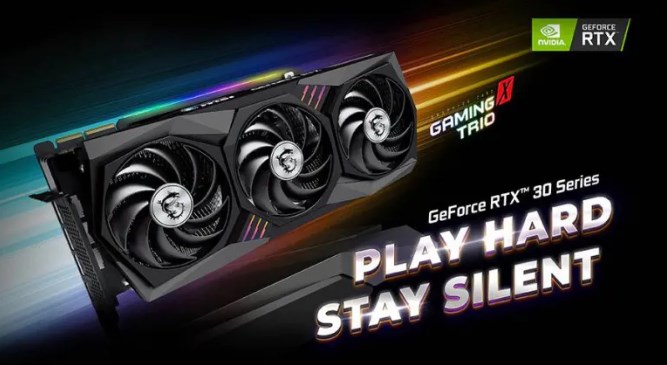 MSI's RTX 30 Series graphics cards are the best on the market, proof of this are their GAMING and VENTUS gamuts. In their case, MSI has revealed their graphics cards with certain details, hiding their frequencies until their release date. The models that we will see in these gamuts are the RTX 3090, 3080 and 3070, like most assemblers.

We would just like to highlight that the Gaming gamut comes with the new TORX Fan 4.0 fan design, which pairs the fan blades to take advantage of the new TRI FROZR 2 cooling system.

As for VENTUS, it comes with TORX Fan 3.0, available in 3 and 2 fan variants. 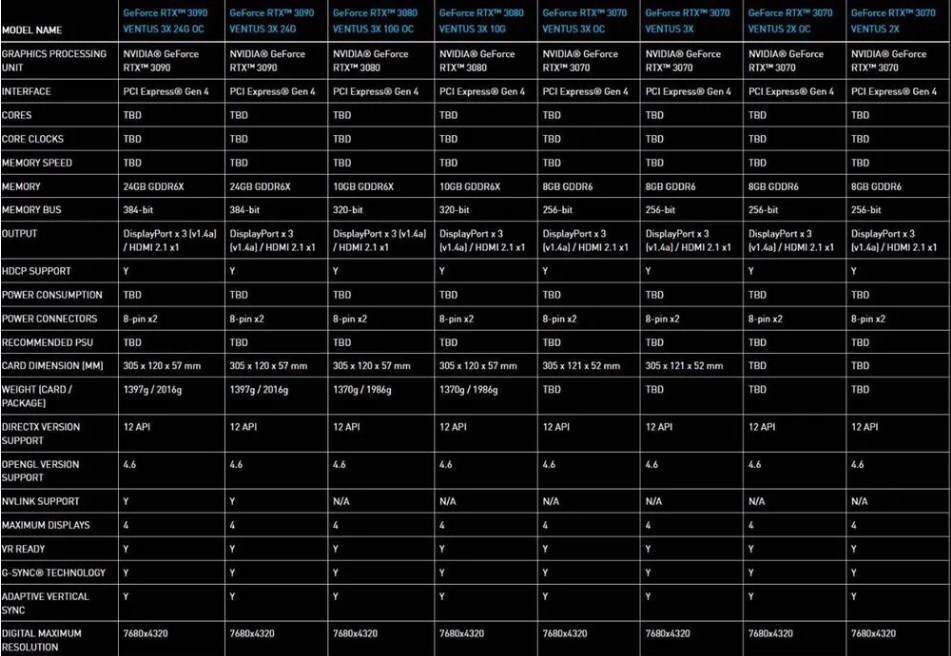 It is the brand that has given less details at the moment, but we know that they will come with 3 fans and a WindForce 3X cooling, ideal to promote a good overclock.

Many of you were waiting for ASUS graphics cards, known for their aesthetics and great performance. We will have RTX 3090, RTX 3080 and RTX 3070 in their very different gamuts. 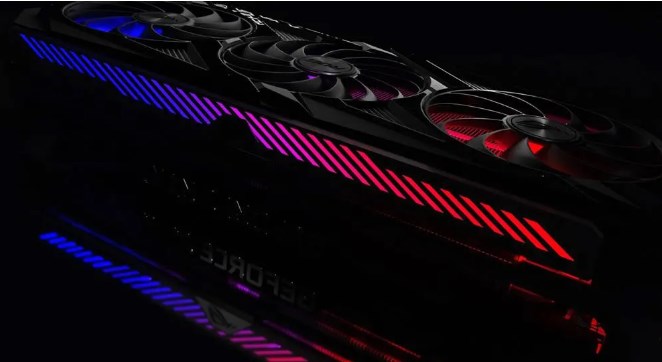 It is the most demanding gamut from ASUS, which combines aesthetics and great performance. We will find an improved 3-fan design, but the central one has 13 blades that provide increased static pressure to improve cooling. The other 2 fans have 12 blades and allow a lateral dispersion of heat, as they improve air flow. Also, the reduction of the vibrations of the fans has been worked.

The heatsink occupies almost 3 PCIe slots, but it has MaxContact technology to dissipate the die, like the entire surface of the PCB: capacitors, power stages, etc. The components are soldered onto the PCB using a manufacturing process called Auto-Extreme.

The PWM fans are synchronized based on the temperatures of the CPU so that the team is coordinated in its work to expel heat. In addition, ASUS has wanted to incorporate the Dual BIOS switch so that we can choose between a silent or performance profile without having to do it through software. Also note that we will have a voltage sensor to monitor the voltage of the power supply rail. 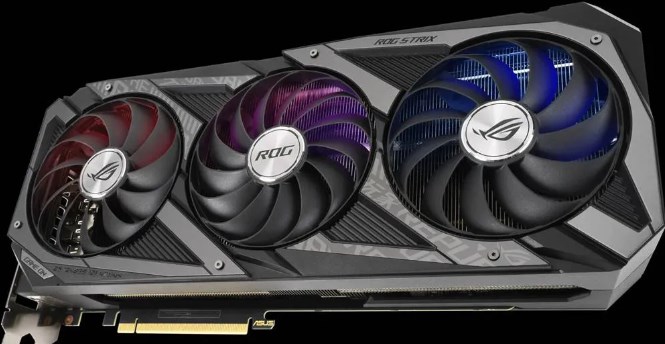 How could it be otherwise, on the front we will have customizable RGB lighting and a reinforced metal frame that gives us that premium feeling that the ROG Strix signature carries. 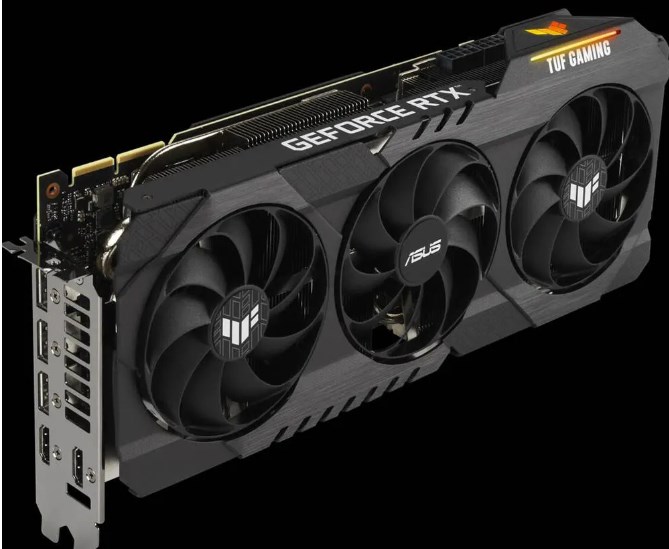 TUF never disappoints with its manufacturing process and its military certifications. Your NVIDIA RTX 30 will star in a dissipation characterized by having 3 fans that come with systems to prevent them from vibrating when they rotate at high revolutions.

It's back to TUF quality, which means a selection of components that is ideal for durability and performance. In this way, their MOSFETs are top-notch, the condensers are military grade, and an Auto-Extreme manufacturing process is followed for maximum precision.

The rear of these GPUs features a highly ventilated protective metal plate. The idea is that the hot air comes out from both sides. 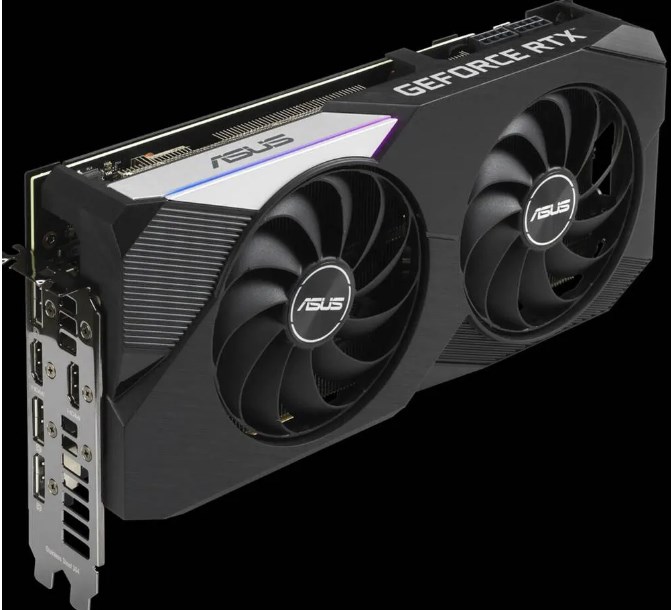 ASUS Dual RTX 30 NVIDIAASUS DUAL stands for the price-quality ratio that many users seek. In this sense, they have focused on the RTX 3070, which is equipped with 2 fans, but not worse than the rest of the gamuts. We continue to see Auto-Extreme technology in this gamut, which is characterized by offering a product that you just have to install and enjoy.