If you ever have entered an options menu in a video game then you probably have found the option “Vsync” or “Vertical sync” and you don’t know what to do about it, but it sounds cool so you turn it on, then your game lags so you turn it off.

Vertical synchronization or Vsync for short is a graphical technology designed for games that detects the amount of frames per second (FPS) your pc is rendering a game, then detects the refresh rate (usually 60 Hz) of your monitor and then it synchronizes them to avoid problems like screen tearing. You should have it on only if your in-game FPS (Frames Per Second) is higher than your screen refreshment rate (usually 60 Hz). And you should not use the in-game Vsync menu option, but the one in your graphics driver (Nvidia or AMD) configuration.

What is screen tearing?

Screen tearing is a problem you probably have experimented without knowing it’s name while playing a PC game. It happens when you move the camera abruptly and then we see the image “cut in half”, this video by Circuits Anonymous explains it perfectly:

This effect happens when the game is sending information that the refresh rate of your computer can’t keep up with. It tends to happen more in games with advanced graphics and with a refresh rate over 60 FPS without a monitor capable of over 60 frames per second. The relation between display refresh rate and GPU render refresh master must be 1:1, which means a monitor of 60 Hz can display a game at 60 fps at most. It is when the game “moves” over the monitor refresh rate that occurs the desynchronization.

So to be clear, Vertical Sync won’t better the quality of graphics. Resolution, shadows, colors and brightness are not related to Vsync.

The Vertical Sync option has existed for a long time in PC. Nonetheless recently the graphical processing unit industry have begun coming up with new and improved solutions that do not have the problems described above. 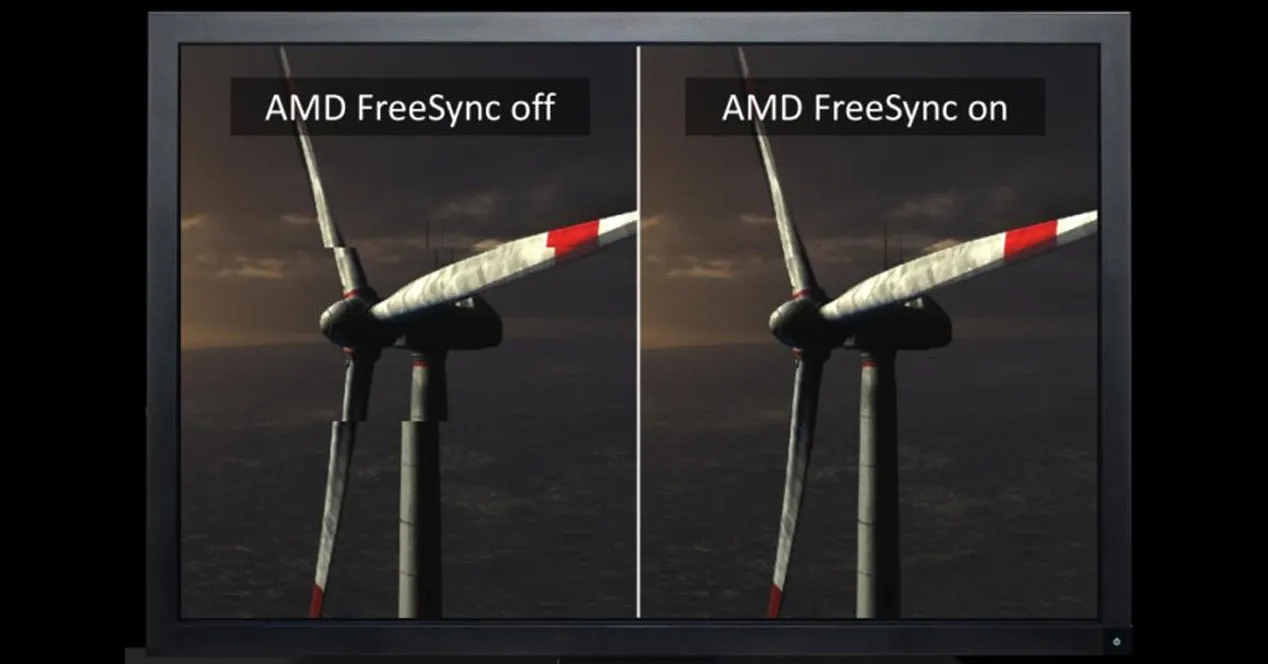 AMD FreeSync is the technology created by AMD to compete with Nvidia’s propietary G-Sync. It is royalty free, free to use and has no performance penalty. This results in FreeSync capable monitors being cheaper than G-Sync (Nvidia) capable monitors. It allows a fluid experience without interruptions and low latency.

They complement the AMD FreeSync technology, it is best suited for more demanding players with displays of minimum refresh rates of 120 Hz and Full HD resolution. Premium Pro also allows for HDR compatibility, with a rigorous certification in color and luminosity matters.

AMD Enhanced Sync is a technology that allows FreeSync uncapable monitors to benefit from Vertical Sync without the negative part of it, meaning Enhanced Sync focuses on reducing Display lag and preventing stutters before worrying about screen tearing. 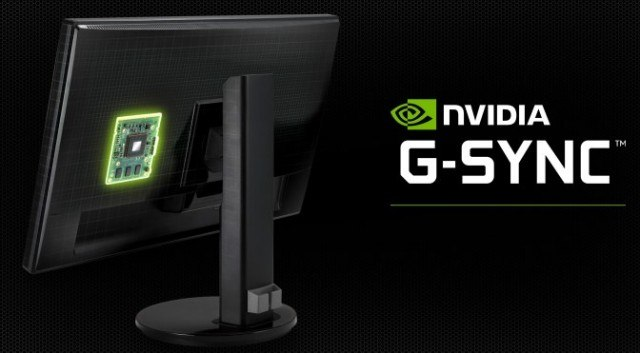 This technology came before AMD’s FreeSync, it allows for a fluid Vsync experience without the cons, meaning no display lag, stutter or sharp FPS drops. The problem is you need a G-Sync capable monitor, which are quite expensive, more so than AMD FreeSync capable monitors.

This technology allows predicting when you GPU will perform well and only then bumping up your frame rates. Thus sustaining higher frames rates without dropping.

Vsync on or off?

For AMD it would be: 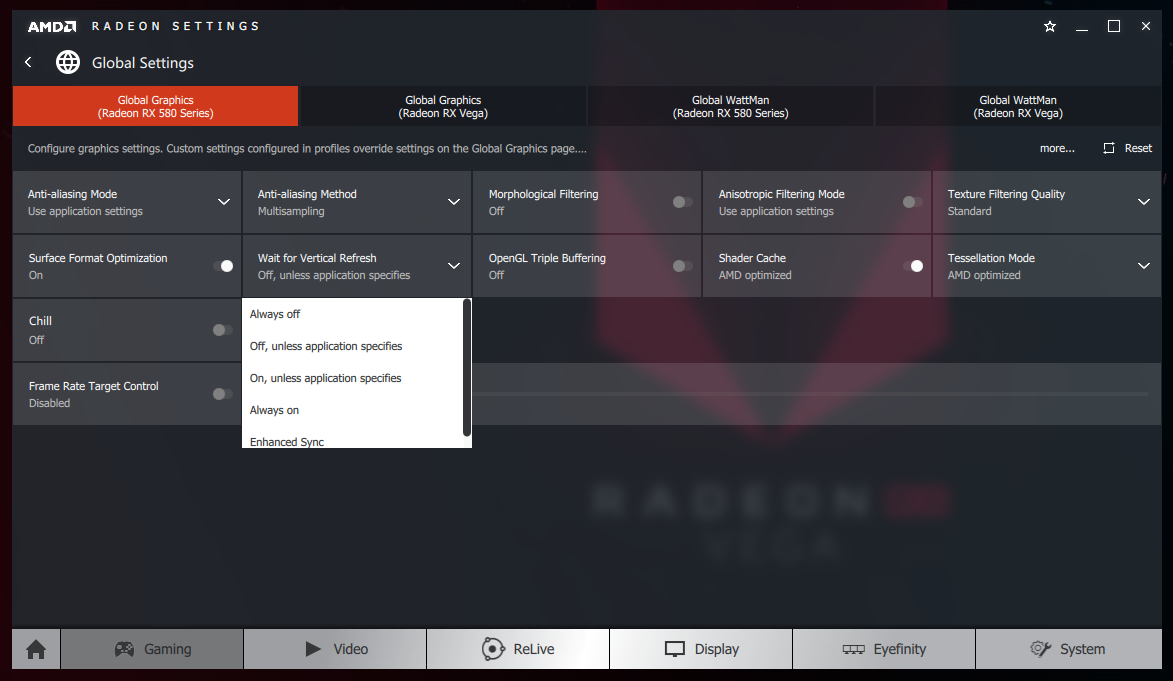 And for Nvidia it would be: 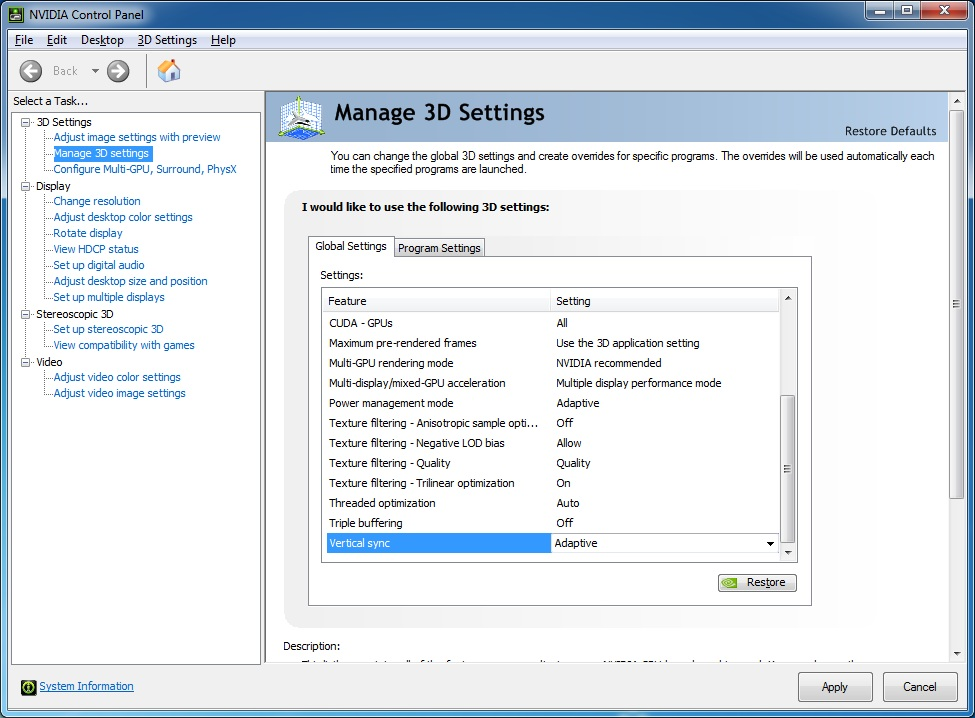 Both Nvidia and AMD technologies are far better than turning on Vsync in the game options. Meaning that if your FPS count is higher than your screen's refresh rate, then you should have Vsync turned on in your graphic's driver configuration, otherwise you will get screen tearing, which will seriously hinder your game experience. In the case your FPS count is lower than your refresh rate, then you should not turn on Vsync, this tends to be for lower end systems rendering newer titles.

Quick Vsync ON or OFF infographic for you: 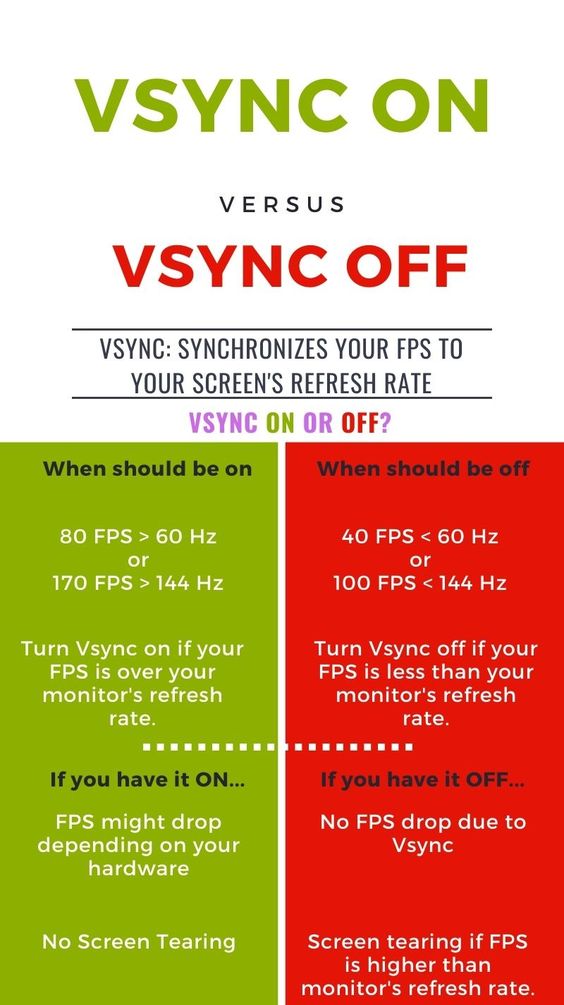 What is Input Lag and how does it affects Gaming?